Very recently I had an email from a reader asking me about my experience with Frankie and her allergies. I realised that I hadn't really posted about this albeit having had quite a few questions about how we found out. Food intolerances and allergies are a very relevant issue and something I plan to write about in more detail in the future. But for today, I am going to write about our personal experience in hopes that it will help another parent out there. I always had a fear, with all of our children, that they would have an anaphylactic reaction to a new food being introduced. I'm sure I am not alone in that fear. How scary it must be, for a new parent to have a baby or child experience an anaphylactic reaction for the first time.

My gratitude for having clued onto Frankie's allergies before she had a reaction like this is immense. I count myself so lucky that for some reason I was very cautious when introducing different foods to Frankie. I am in no way religious but I do believe there is something bigger protecting our babies. Call it dumb luck, a guardian angel or mothers intuition. She has a very severe allergy to raw egg and somehow, with the amount of eggs we were eating, she didn't have a serious reaction. 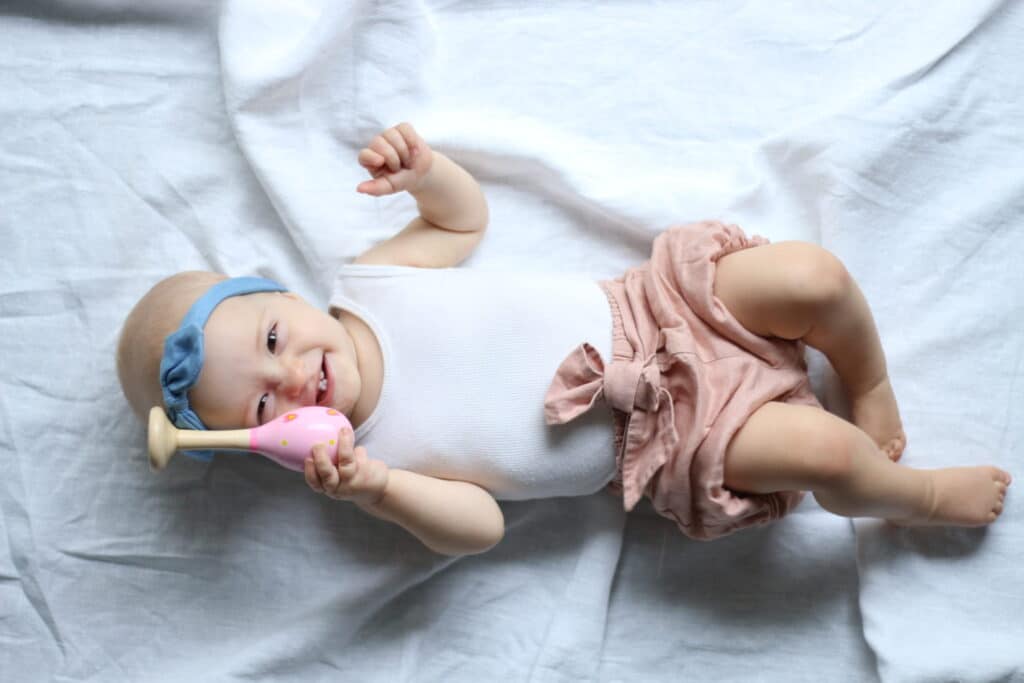 We found out through skin prick testing that Frankie is allergic to peanuts, egg and dairy. She also has what is called an FPIES reaction (Food Protein-Induced Enterocolitis Syndrome) to banana and avocado. An FPIES reaction causes severe vomiting and diarrhoea. Unfortunately we only found out about this reaction through her consuming the food and reacting. Que: projectile vomiting. It took about 3 or 4 episodes for us to link it back to the banana (sorry Frankie). Funnily enough, the protein in avocado is very similar to that of banana. The allergist advised us to be cautious of avocado for this reason. We did have a vomiting episode following avocado on toast so it is highly like that this is an FPIES reaction for her as well.

I died a little inside when we found this out. I mean, avocado? Seriously? I can deal with peanuts (as much as I love peanut butter). I can even deal with egg. But avocado and banana? They're baby staples.

What Made us Think Frankie Had Allergies?

There was a few red flags that made us realise that Frankie was reactive. Firstly, she would come up in a red hive like rash (urticaria) randomly. At first we thought there might have been dust mites that she was reacting to. Or that she was getting bitten by mosquitos and reacting. However, one day when I was holding Frankie and making some peanut butter on toast, she put her hand in the jar of peanut butter. Because I was already suspicious about allergies due to her vomiting episodes and seemingly out of the blue rashes, I washed her hand straight away before she had the chance to put her hand in her mouth. Ten minutes later Frankie was covered in a red blotchy rash and hives, all over her head and upper body.

There was also an incident where I gave Frankie some cheese, before we knew she was allergic. She began choking on the cheese and then vomited quite profusely. I now realise that this was most likely due to an allergic reaction rather then a choking episode.

As I mentioned earlier, Frankie had two lots of skin prick tests. The first lot of testing was through Lady Cilento Immunology Department. They asked quite thorough questions about her reactions and only tested foods that I had noticed reactions to. The testing took 3 hours in total, which I wasn't prepared for.  I had all three kids with me and had to try and keep them entertained (and quiet). This was not ideal as I did forget a few foods that I'd noticed reactions to (dairy being one of them). This led me to go to a private allergy clinic for further testing.

The private allergist was much more thorough and tested for not only baked egg, which Frankie had shown mildly allergic to, but to raw egg as well. It turned out that Frankie is very highly allergic to raw egg so I am really glad we went back for more testing. This round also showed Frankies allergy to dairy.

Tip; Be prepared for the long haul if you need to take your child or baby for allergy testing. Make sure you pack their food/milk/water as well as toys to distract them from the skin prick test. Frankie was great with the first lot of testing but became really upset in the second lot as they tested for a much larger variety of foods. Breastfeeding through the second round of tests helped to distract Frankie.

We walked away from our first lot of testing with a script for an epipen. I found this overwhelming and scary at first. However,  I feel much less worrisome about trying new foods with Frankie now that we have the epipen. At least we are prepared if she does have an awful reaction. In the case where Frankie is accidentally exposed (which has happened a couple of times) and she has a mild to moderate reaction, we have been instructed to give antihistamines. We have found they work really quickly and effectively.

I was also instructed by the allergist to cut out all of the foods that she is reacting to, as the proteins can go through the breastmilk. Interestingly, only the second allergist we saw felt that we needed to do this and not the first doctor. Everyone seems to have different opinions which can be difficult to navigate. But since I have cut out these foods I have found that Frankie doesn't experience sporadic rashes anymore. It can seem quite restrictive at times, especially having to cut out eggs, however we are getting used to it and working our way around it.

I support both Frankie with the probiotic strain LGG, which helps to reduce the reactivity of the immune system. I take a quality fish oil as well as zinc and vitamin C, which improves the quality of my breastmilk. This in turn helps Frankie's immune system. All peanuts and peanut butter has been removed from the house and we only use eggs very occasionally. In which instance, we are very cautious to wash our hands really well.

So that is our story so far. I hope that in some way it helps you with your own experience with your child or babies allergies. If you have any more questions about our experience, please feel free to pop them into the comments section below. Likewise, if you have experienced allergies yourself or with your little ones, I would love to hear from you and any tips you might.

straight to your inbox?

I'm a nutritionist turned healthy recipe developer who is all about creating delicious food designed to nourish. I love using wholefood ingredients and have a strong focus on gluten free, dairy free and refined sugar free recipes.

straight to your inbox?